Last year, when I was doing my endless workbook series slog through all the verb tenses, I thought they would never end. I got completely confused … not by the conjugations, most of them were relatively simple … but by which tense went where. If I wanted to say: I had already walked the dog when it started to rain, which tense was that?

One of the reasons I love the conjugations from 123 Teach Me is that they give me the English equivalent of each tense. If I go to the conjugation for caminar, I find that "I had walked" was había cambiado. Ahh, one of those two-word verbs. (Called pluperfect.)

On paper, none of this was hard. The sentences and exercises were organized by tense, so once I figured out what tense I was in, writing sentences became a rote exercise.

However, in conversation or wherever I was searching for the right tense and trying to find the right conjugation, my brain turned to spaghetti, and I went mute.

At some point, I had an aha! I found a pattern that turned what seemed like endless tenses into four … each with two simple-pattern “wings.” While this pattern works with all four indicative tenses (meaning all the normal uses ... not subjunctive or commands), let’s work it out in present tense.

Take the lovely, regular verb bailar: to dance and set up a chart with two wings: past and future. The idea is that even when you’re in the present, sometimes you’re leaning forward into the future or backward into the past. For example:

I dance to the music. Bailo a la música.

However, if I want to make it clear that I am dancing right this minute … leaning as far as I can toward the future, I am as far out as I can be and still be in present tense. One tiny shift further and I would be in the future tense. This is called present progressive. When you lean toward the past, you are still in the present but talking about a past action, this tense is called present perfect.

I am dancing to the music. Estoy bailando a la música.

I have danced to this song. He bailado a esta canción. 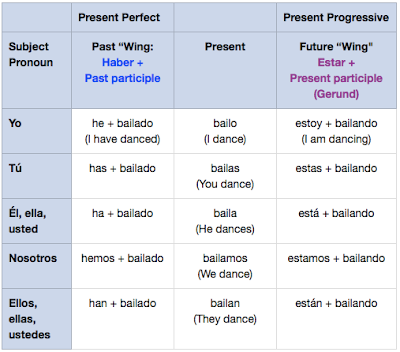