I’ve been studying Spanish fairly diligently for a year and a half … grammar, vocabulary, writing, reading, listening … everything except speaking anything except the most rudimentary phrases. I even created this blog to help support my learning process.

NOW, it is time to leap into the conversational fires. I’ve chosen the month of May to concentrate on speaking. After spending the past three weeks gathering my resources and materials to support this challenge, I was ready to begin when I decided I needed some outside advice from seemingly unrelated sources like Tarot cards and the wisdom of Rumi.

At morning coffee, my friend Cynthia and I drew cards for our projects. Mine was the High Priestess. I’m sure she’s here to guide me on more than just this Spanish challenge. The words related to the High Priestess according to  https://www.biddytarot.com are: Intuition, sacred knowledge, divine feminine, the subconscious mind. Not the first words that would come to mind for a language-learning project.

Reading the expanded guide gives me this:  the High Priestess is the guardian of the subconscious mind and the teacher of sacred knowledge and hidden mysteries.  She teaches you that the world is not always as it seems and more profound influences are often at play.

My takeaway on this is that this challenge might not be as much about powering through hundreds of verb conjugations and grammar rules as it is relaxing and following my intuition, allowing the right conversations to happen with the right people at the right time rather than force marching myself into a pre-conceived notion of what’s “right.”

To help me keep this intention, I’m going to draw a new Tarot card for each day of this challenge.

Rumi. When I drew a card from the incredible Card and Rumi Book Pack by Eryk Hanut and Michele Wetherbee, a warning card showed up. The first part of the message reads:

Are you dazed
from too much
meat and wine?
or are you
a soldier on
the field of battle?

The second part reads:    Look at what you are
doing and decide if your
motives are selfish or brave.

Selfish - I really want to speak Spanish so I can talk with people who have a different culture, history, and world view than I do.

Brave - I have to be brave to put myself out there to interact with people making my inadequate knowledge of Spanish completely visible as well as my limited perspective of their lives and challenges.

I don’t feel like a soldier on a field of battle. However, it would be much easier just to be a reader of Spanish, maybe even a writer of Spanish, than to be such a beginner, such an incompetent, in a field where I’ve reached a relatively advanced stage in my own language.

There is only one way to achieve my goal of speaking with the people of Mexico (at least the Spanish-speaking ones … there’s millions of people here who speak indigenous languages, but that’s another world all together), and that's to step into the void and begin speaking Spanish as much as possible every day.

Living in Ajijic, which runs on English more than Spanish, makes finding native speakers to talk with not such an easy task. Almost everyone wants to speak English, so I also have to be creative and design interactions that will take me beyond basic greetings or ordering food in a restaurant.

I need to be brave as Rumi says and accepting as the Priestess advises. Simple, huh? 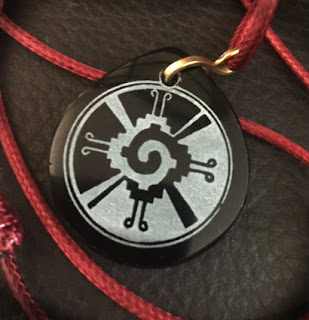 Hunab Ku -- I wanted a charm for the challenge ... something that would remind me to keep going, bring me confidence and luck. I didn't know what it would be so I began wandering through stores. As I saw this hunab ku, I knew it was it.

I came across the symbol a few years ago when I was writing a young adult fantasy set in the Mayan jungle, "Sarana's Gift... It changes everything."

The info I found at the time said the Hunab Ku was a Mayan symbol meaning the balance and unity of all things with a further description as "the consciousness which organized all matter from a whirling disk - into stars, planets and solar systems. Hunab Ku is the Mother Womb which is constantly giving birth to new stars and it gave birth to our own Sun and planet Earth as well as the other planets found in our solar system."

Wikipedia now says it is an Aztec symbol meaning "the one god." Regardless, I like the symbol and the balance of light and dark. It helped me through one project so I choose it to help me through this one.

And,if you look closely, the Goddess of the Lake shown above is wearing the hunab ku.

My meta (goal) for the 31 days is 1,000 minutes of Spanish conversation with native Spanish speakers.