Last year I went through a grammar and verb workbook series … 4 workbooks for a total of 600 pages … one verb tense at a time. Each of the tenses seemed pretty straight-forward … until the layers built up and I got lost in an endless, spiraling tower, where I didn’t know what tense to use when.

I knew I needed simplification. Finally, one day it dawned on me that there are really only 4 tenses, (5 if you count both past tenses), and each of them has two simple and consistent variations. (Keep in mind this has nothing to do with subjunctive yet.)

The progressive wings ALWAYS use a form of estar and the present participle (also called a gerund):
Present tense … I dance  (bailo) … this is an action I take in the generalized present.
Progressive present wing … I am dancing (estoy bailando). This is an action I am taking right now. It’s as close to the future as you can get without actually being in the future..

The perfect wings ALWAYS use a form of haber and the past participle.
Present tense … I dance (bailo)
Perfect present wing … I have danced (he bailado). This is an action that extends from the past almost into the present.

So the Present with it’s future and past wings, looks like this ... one tense you can use in three ways. 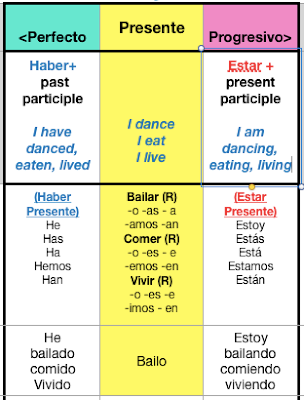 The pattern is the same for the other tenses. Of course, there are two versions of the past tense, one representing completed actions, called preterite or pretérito (I danced yesterday), and one called imperfect representing actions without completion (I danced my joy).

Paul of SpanishwithPaul calls one the "dot past," meaning that it was finished, a completed action. He calls the other one the "line past," meaning that it was ongoing. Here's a good 3-minute video to help you sort out which verb to use.
You will sometimes hear the term "pluperfect" ...
that refers to the Imperfect Perfect. (a bit mindboggling
but it's simplified below ... it's one of those "wing" things). 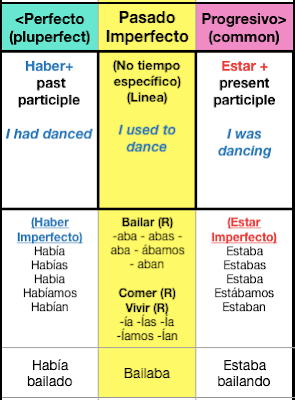 Future tense follows the same pattern, but also offers a simple way of to put an action into the future by saying "I am going to ... " using the verb ir plus a and aninfinitive. I am going to dance (Voy a bailar ... vas a bailar ... va a bailar, etc.) 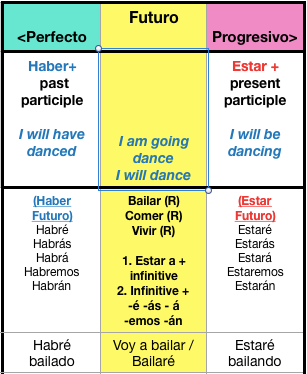 And the conditional tense follows the same pattern to complete the action tenses. 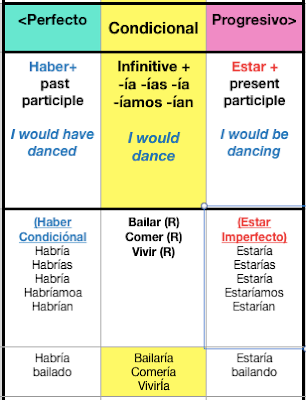 There's one more oddity that you probably won't need anytime soon ... or ever.

Sometimes you need to say may want to say that you have been dancing all night ... lucky you! The grammarians amongst us would call that "perfect progressive." In Spanish you would put a form of haber together with estado and the present participle ... as follows: