Acquiring Spanish: The dance and deception of immersion

Within three days of each other, two language experts offered new videos with seemingly diametrically opposite advice. This is an example of what a language learner is faced with on an almost daily basis: conflicting directions from the experts such as the two above.

Turns out there is a difference in how they each define immersion and each one has valid points so there will be notes from their videos at the end of this post, but first a story … my story of searching for immersion.

After a long list of false starts attempting to learn Spanish, I had been listening to Pimsleur for several months and was ready to make my language breakthrough by going in-country, diving into the deep end of immersion. I had a plan: two weeks in a language school in SMA, then three weeks of practice and warm water in Playa del Carmen.

Within days of landing in Mexico, my plans began washing up on the shores of reality. The San Miguel school put me into a beginner’s class with a lovely couple from Australia. They had no background in Spanish and its sounds were completely foreign to them. I was from California and had a mishmash of sounds and vocabulary from my many previous dabbles at learning the language. It wasn’t a good match.

I switched to one-on-one coaching, the equivalent of a one-hour class three times a week and decided I would learn primarily from the workbook and self-study in the streets … the real-world of immersion I assumed.

San Miguel is lovely and my long-walks through its streets delighted my eyes and ears. However, it didn’t take long to realize that talking to waiters and taxi drivers wasn’t going to get me far … and that people were more than willing to speak English when I needed it. At the end of two weeks, I had worked through a bunch of workbook pages, picked up some words, and fallen in love with Mexican wall art murals. Spanish progress: close to nil.

I needed a new plan and decided that I would rework it in Playa del Carmen, chosen because I wanted warm water and cenotes. When I stepped off the bus in PDC after the flight to Cancun, I knew I had made a mistake. It was late September, hot and muggy, and Playa del Carmen seemed like a touristy mess after being in San Miguel. To make matters worse, my tiny Airbnb was stifling, noisy and ugly. What now, fair child?
Someone had mentioned a trendy new place in the mountains. All I heard was “cool,” and immediately forfeited my pre-paid rent and  boarded a plane to the  Tuxla-Gutierrez airport on the way to San Cristóbal de las Casas, where I expected to find the Shangri-La of immersion.

That turned out to be half-right. SCLC was a wonderland of charm and beauty. I immediately met an English-speaking local resident, an English-speaking Mexican woman, and a travel companion from England. All of these new friends spoke Spanish; however, our conversations were all in English.

By now, I knew classes weren’t the right approach for me and decided to split my time between study and exploration. That plan faded as I fell more in love with the exploration part. Study time was minimized as I wandered through San Cristóbal, slowly absorbing the culture of Mexico and taking side trips to Tonina, Merida and Guatemala. Three weeks stretched into four months and I went home immersed in Mexico but still an outsider to the language.

I assumed I would continue my language studies, however, life interfered and time passed until 2017 when I moved to Ajijic, the small town on Lake Chapala where English may be edging itself into the position of first language. There was no delusion about this being a place of language immersion; however, I still had the belief that immersion was the answer … I just had to get ready for it. Self-study would be my new plan.

After a rigorous slog through the four workbooks of the Warren Hardy Spanish program (600 pages of a well-organized, if boring, offering of grammar and verb tenses), I was NOW ready for immersion. I chose a three-week home-stay program in Cuernavaca. My home-stay family was amazing, kind, funny, and disciplined about speaking only Spanish.

Soon, I began to limit my time with my wonderful family because the language challenge was so frustrating … and I dropped out of the class portion of the course on Day 1!
The class started with grammar 101 and was like they handed me a size-2 dress … it just didn’t fit. I was devastated. This was supposed to be my bridge into conversational Spanish and I just knew I couldn’t make myself sit through classes about things I had spent the last year learning. Should I just give up? Maybe I just didn’t have what it took to learn a new language.

Finally, after long walks and a sleepless night, I found a compromise: participate in the fascinating program they had designed about the culture of women in Mexico and do self-study instead of the classes.

The self-study part worked well as I found incredible study aids online, many of them free. The cultural offerings presented another issue. I still couldn’t hear the language offered by Spanish-speakers, some with translation and some without. I was lost most of the time.

This turned out to be a gift as I realized I needed much more time listening to Spanish, more than I could get in coffee shops or eavesdropping on the street.


I went looking for listening resources and discovered the second-language acquisition concept of “comprehensible input” developed by the linguist Stephen Krashen who says it is the only way we acquire language. British Council’s Teaching English describes comprehensible input as:

Comprehensible input is language input that can be understood by listeners despite them not understanding all the words and structures in it. It is described as one level above that of the learners if it can only just be understood. According to Krashen's theory of language acquisition, giving learners this kind of input helps them acquire language naturally, rather than learn it consciously.

That concept and the discovery of some truly amazing
online resources changed everything.

It has been five months since that Eureka moment … and … no … I’m not fluent and probably won’t come anywhere close to that for another year or two. However, I am in love with the language and the learning process again.

A couple of months ago, I started a learning blog … like a giant, electronic notebook … to hold all my resources and learnings on this journey. Titled Aventura Español, it’s a constant reminder to stay balanced on this journey … I deeply want to learn the language … but also want to experience the beauty and culture of this amazing country.

I invite you to use the blog in any way that works for you. Many of the resources are free and I have no financial ties to any of the paid resources … except for the money that has come out of my own pocket. 😉

If you’re just getting started … or having difficulty making progress or knowing how to use your time and efforts most effectively, I suggest clicking on the “Start Here” button at the top of the blog. 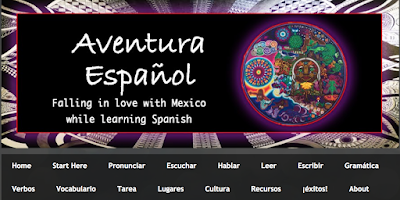 P.S. This isn't the end of the discussion on immersion ... next up The Myth of Immersion in Today's World and lessons from Pátzcuaro.


Notes from the videos. (If you only have time to listen to one, I highly suggest Richards’. After listening to several of his videos, I subscribed to his)

Olly Richards has taught himself to speak eight languages while traveling the world.
Steve Kaufman is a well-known polyglot who speaks 16 languages and continues to learn new ones.

Richards opens his video by stating that he believes that chasing the idea of an immersion experience can be less than helpful and has opportunity costs since there are other activities that could be more effective. He defines immersion as “surrounding yourself with native level content,” such as books, movies, podcasts, being with native speaking people, living abroad, or taking immersion courses in countries that speak your target language. "For most people it is very difficult to create a genuine immersion environment.” The bottomline of Richards’ video is that the only way you learn a language is through “comprehensible input.” He recommends finding materials that you can enjoy and understand most of while still pulling you into greater understanding.

While Kaufman begins by saying, “… beginners should immerse themselves in the language,” he goes on to say he means immerse themselves in real language, not getting lost in the grammar. He recommends not staying fixed in repetitive, beginner texts unrelated to everyday life. Describing his own process of learning, he says he studies stories, reading, listening, and speaking one sentence as a time. He doesn’t like children’s stories or folk tales; preferring stories about everyday life. It takes time and repetition to absorb a language.
Posted by Joyce Wycoff at 2:38 PM