Preface: I wrote this medium.com article in May, 2019, while spending a month in Pátzcuaro, theoretically on a deep immersion into Spanish. Loved Pátzcuaro but did not make a lot of language progress. A month later, I very unexpectedly decided to leave Mexico and move to Reno.

The year that followed included no focus on language. However, I did move to a neighborhood which has a lot of Spanish speakers and discovered that the lust for the language still glowed. So, now I'm beginning again and found this article which has some good info ... and made me laugh. I'm determined to make a breakthrough this time. -- joyce, 6/1/2020.

If you are thinking about learning a second language, there are several myths that you will have to deal with on your journey.

Instant Spanish: The first, and most seductive, is that you can do it in 10 minutes a day, or in 30 days or 1 month or 3 months. Spanish is the language I’m learning, and I have been sucked into a lot of those “get fluent fast” sites. The optimist in me always wonders though: Maybe there is a magic bullett … ?

That thought led me to an entertaining example: Spanish in a month, a video by Connor Grooms, a 20-ish digital nomad. His 29.20 minute documentary had 1,382,222 views before I watched it. He admits that he has an addiction to learning things in a month … from learning how to be a DJ in Prague to adding 26 pounds of muscle mass in a month.

Obviously, there is a generation (or two) gap here
but I’m prepared to be open-minded.

At the beginning of his documentary, Connor Grooms tells us he is Medellin, Columbia, where he is “going to do the same with Spanish.” I translate that as “learn Spanish in 30 days” and am intrigued. I’ve been studying pretty seriously for over a year and definitely seriously for three months. If there’s a more effective way to study, I want to know about it.

However, he goes on to say, “I can have friends who speak no English and get by fine and have normal conversations. But, I’m not perfect and there are some words I don’t know.”

Squealing brakes sound in my brain.

WHAT?!! You can have normal conversations and get by fine? There are only some words you don’t know?

I am still at that ugly, stuttering stage where all the words I know are racing to be first into the conversation funnel, pushing each other aside, clamoring to make themselves heard while the person in front of me stares, waiting for that first drip of comprehensible language. “Muy bien,” I finally reply. Arrrrggggghhhh!

NOTICE: I wrote all of the above before I decided that, in the interest of being open-minded, I would watch ALL of this man-child’s video.

Sometimes, life turns on a dime.

Connor’s first step is to ask for advice from experts such as Benny Lewis, well-known polyglot. Well, that’s a good place to start and it makes me wonder who I should be seeking advice from. Bookmark that thought for later.

How am I supposed to express myself without verbs which have all those conjugations? How can I even tell someone I feel happy if I don’t know how to say “me siento feliz”? I guess I could jump up and down with a big smile on my face and scream “feliz! … feliz!” There is a limit to my open-mindedness.

However, as Benny continues, he goes on with the idea of not worrying about correct Spanish, but just finding a way to say something. His example is “Today I to write, Yesterday I to write, Tomorrow I to write.” Definitely not correct but probably would be understood, and requires only five words … yo (I) hoy (today), ayer (yesterday), mañana (tomorrow) and escribir (to write).

This makes me pause for a moment as I get a glimmer of the idea. I am learning a lot of verbs and often stumble over finding the right conjugation. I could default to the infinitive like escribir. Hmmm.

Benny goes on with two other recommendations: make flashcards with Anki of all the words you learn every day, and find online tutors that fit your level and style. I think flashcards with images work better than just Spanish/English words but the idea of doing them DAILY implies a discipline that fits the “Spanish in a month” concept. I do believe the early stages of language study is about building relevant vocabulary. You have to have something to talk about.

Principle: collect relevant vocabulary daily and use flashcards, with images.

Principle: you need a tutor, pick carefully and consider an online tutor.

So, Connor finds a teacher he can work with in person. Interesting that the teacher immediately teaches him a bit of grammar … how to make the future tense by using “Voy a plus the infinitive.” So, now instead of “Tomorrow I to write,” Connor can say “Voy a escribir.” So much for ignoring grammar.

The next part of Connor’s documentary is brilliant. He has a roadmap. I don’t know if he created the map as part of his month or before he started, but this is golden. In one of my beginning Spanish classes, we learned the word for helicopter. Just how often would I use helicopter in a conversation in any language? Waste of time for me since I’m not interested in helicopters. My vocabulary lists comes from the words I meet every day, words I want to know and use, or from the materials I read.

Principle: create a roadmap of what to learn when.

Connor devotes a good portion of his study time to pronunciation, something I believe receives too little attention. What I’ve found, for me at least, is that being able to hear the language is the most difficult part of learning it. If we aren’t pronouncing a word correctly to ourselves, we won’t recognize it when someone else says it. Great principle.

Principle: learn how to pronounce the sounds of the language.

To get the help he needs with pronunciation, Connor goes to Idahosa Ness, founder of the Mimic Method, and someone new to me. Within a few minutes of exploring the Mimic Method website and video, I knew this was one of my missing pieces.

Maybe this could be where I learn how to make Spanish sounds and develop the ability to understand the language. Price: $297. This open-mindedness could get expensive.

The next expert Connor connects with is Brian Kwong of Add1Challenge, a program I recently learned about which promises that you will be able to hold a 15-minute conversation in your target language within 90 days. It only opens the challenges periodically and the next one opens April 21. Price: $197.

Brian schools Connor on adding accountability to his program. “If there’s nothing at stake, you can just say, ‘Oh, I didn’t do it.” Brian says that some people are motivated by pain, some by rewards, and asks Connor what motivates him.

Connor says he would need the threat of a major sting and offers to pay Connor $500 any day he doesn’t follow through with his commitment.

Okay … so let’s say I actually do this thing that is forming like a storm cloud on the horizon. Let’s say, I form a 30-day plan and use the Add1Challenge as a goal: have a 15-minute conversation with a native Spanish speaker at the end of the 30-days.
What would hold my feet to the fire? What if I agreed to donate $500 to a favorite charity any day I didn’t complete my agreement? Hmmmm.

However, Brian takes it a step further. “Tell everyone.” Tell everyone about the challenge. Yuck!

The idea of having periodic milestones and being able to recognize and test progress is a great one.

And, if one is going for conversational fluency, the milestones should be related to conversations. I also want to read Spanish poetry and literature so there could be a milestone related to that also.

Part of the way through Connor’s challenge, he finds that he needs more vocabulary building and shifts his challenge to spending more time on vocabulary upfront and shifts some of his pronunciation to later in the month. All of this is done in conversation with Brian Kwong to avoid breaking his commitment to the challenge … and losing $500. He emphasizes using a spaced-repetition flashcard system to enhance his vocabulary memory.

Heartwarming. At about minute 21 in the video, Connor starts talking about how hard and frustrating the project is, not only mentally but physically. “I under-estimated how physically exhausting all this studying and speaking would be. I find that almost every day I have to take a nap for two hours.”

An amazing late night scene on the last day of the challenge brings Connor to the realization that he owes Brian $500.

Is this a failure? No, it just added to the cost of the project. And, who knows how much better his performance was throughout the project because of that potential threat. Without it, he might have done far less well.

At Connor’s final conversation, the test of the project, he listens more than he speaks but he understands the gist of the conversation and his pronunciation is good. The man he is talking with generously calls him advanced and capable of having conversations with native speakers.

In the ending, Connor encourages viewers, saying they can do what he did, that he is not special, he just put in the time, about 150 hours in his 30-day project. His message: put in the time, learn the most useful grammar and vocabulary first and focus on communication. He closes with:

“You don’t need a better piece of software … you need to talk with a real human.”

My takeaway: I want to do a 30-day challenge. I want to make a leap in my Spanish abilities. In order to do this, I need to develop a roadmap of what I need to learn and a doable daily schedule. I need a series of milestones to test my progress as well as a “stake in the game.”

I need to make a commitment to daily conversation and who those conversations will be with. 😢 I need to take the Mimic Method course and maybe the Add1Challenge ($494).
The month of May is open. It is a hot month that makes me want to stay inside. I could be ready by then.

I have recently set up a Spanish learning blog … Aventura Español … falling in love with Mexico while learning Spanish. This would be a great place to monitor my accountability. I have a perfect tutor found on italki … he could be part of this. I could call it the 30-day Spanish Leap Challenge.

Principle: collect vocabulary daily and use flashcards, with images.
Principle: you need a tutor, pick carefully and consider an online tutor.
Principle: study relevant vocabulary using a spaced-repetition flashcard system
Principle: create a roadmap of what to learn when.
Principle: learn how to pronounce the sounds of the language.
Principle: develop periodic milestones

Here are two other posts about principles of learning a language:

Principles of Learning a Language
With these things in mind, I created the Aventura Española model 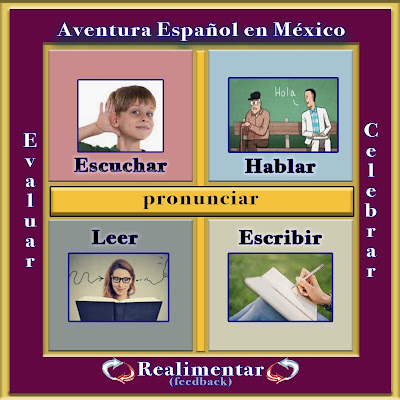 Postscript:
What do I need?
What are the obstacles?